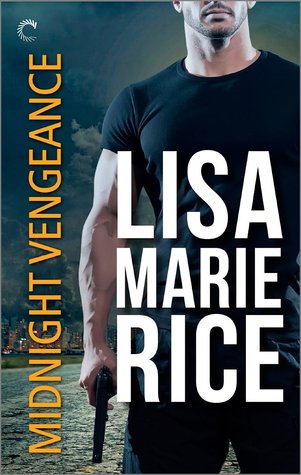 In Midnight Vengeance (Midnight #4) by Lisa Marie Rice, Jacko is a former SEAL now working private security.  He is tough and nothing phases him.  Except for Lauren.  From the moment he first sees Lauren she enchants him.  She drives him crazy in every way.  But he keeps all of that inside because "Not one ounce of his very extensive and very expensive training gave him a clue about how to handle Lauren Dare."

Lauren has no clue how Jacko feels.  She knows there is much more to him than other people chose to see, and she feels safe with him.  Lauren has a lot of secrets.  She's not who she says she is -she's running from danger, trying to stay one step ahead of someone who wants her dead.  In Portland, she's found what she wants in her life.  But when her guard slips and she knows it's time to run again, she can't resist one night with Jacko.

Jacko sees more than she wants him to see though, and after an unforgettable night he can't let her run off.  Jacko will do anything for Lauren.  But can he and his team protect her, while getting rid of the threat to her?

Midnight Vengeance sucked me in and wouldn't let me go.  I loved Jacko and Lauren, how they related to one another, and just understood things without always saying them.  Jacko really stole my heart.  I felt for the boy he was, all he'd been through, and the man he is now.  He has no clue about relationships, and I loved how his character grew because of his love for Lauren...and how he allowed himself to grow, as difficult as it was for him.  Lauren sees through Jacko's walls, and just gets him.  She doesn't play games, and when she takes the chance to trust him and his team, she's all in.  She is independent, strong, and brave, but not independent enough to not realize she needs help.  She doesn't want to throw away what she's found and she's going to fight for it.  Their relationship was believable, and their interactions at times humorous and at all times heart fulfilling.  They just really worked together, and when you read Midnight Vengeance you'll understand why.

I really enjoyed the dual POV in Midnight Vengeance, this really let me into the characters heads and I felt like I really got to know them.

There are a lot of great secondary characters on the sidelines of Jacko and Lauren's story who added strenght to the plot.  I have not read any of the other books in this series and had no problem following along, because this is all about Jacko and Lauren.  The secondary characters are written in smoothly so that Midnight Vengeance can easily be read as a stand alone.

The suspense of Midnight Vengeance is very intriguing and Lisa Marie Rice expertly blends it with the relationship of Jacko and Lauren.  It's a steamy, don't put me down book.

I'd highly recommend Midnight Vengeance to romantic suspense readers whether you've read the previous books in this series or not!  I will certainly be reading the next Midnight book!