Brushing Off The Boss 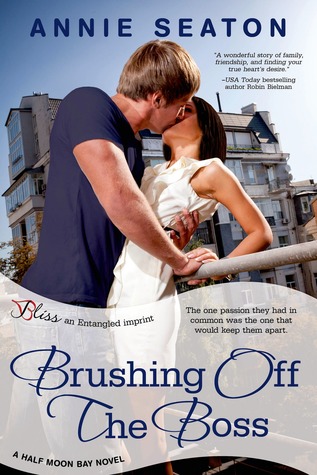 In Brushing Off The Boss (Half Moon Bay #2) by Annie Seaton, Sienna is an artist who is finally so close to her dream of having her own art exhibition in a gallery she owns.  Out for a night to celebrate her birthday and excited about her future, Jack, a man she met once before through friends is suddenly there too.  He's just as hot now as he was then and Sienna decides she might not mind getting to know him better.

Her plans of seduction are soon on hold though and her dreams in danger of shattering when she finds out that Jack is the absentee owner of the gallery she's hoping to buy...and that he has no intention of selling.

Jack is finally doing what he wants to do, and the art gallery is a big part of that.  He is much more than he appears to be, although he does nothing to negate all the assumptions Sienna is making about him.  Worried about her art and her future, Sienna makes a deal with Jack that has the two of them becoming very close and sharing way more than either of them anticipated!  As they grow closer and get to know each other better, both of them will have issues to deal with and Sienna will need to decide if she can truly trust Jack...or will she Brush him off?

Brushing Off The Boss is a fast paced romance that was easy to find myself immersed in.  Although there were parts of both the hero and heroine that I didn't particularly care for, their flaws made them more realistic.  The struggles they go through make them believable.  The chemistry between them is obvious and I felt that they complemented each other well, even if they had a hard time seeing it.  They were a fun couple to get to know.  Sienna was much more open than Jack was, and I was interested to see what she'd do and think when he finally told her everything.

I loved the small town setting of Brushing Off The Boss, and especially the art gallery.  Annie's descriptions of all of this are excellent!

The unexpected turns in the plot that Annie weaves in really added to Brushing Off The Boss, and I liked how she did this in such a smooth, well written way.