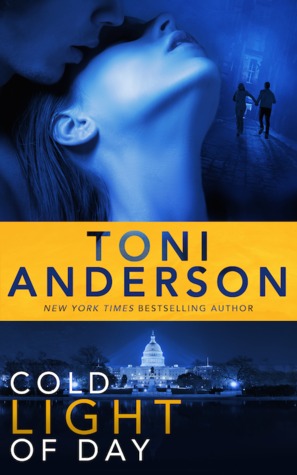 In Cold Light of Day (Cold Justice #3) by Toni Anderson, Scarlett leads a quiet life as a physicist.  She's had enough turmoil and doesn't usually like to draw attention to herself.  She's never believed in her father's guilt for a crime that has put him in prison for years.  Now he's dying and she's determined to prove his innocence.  Unfortunately Scarlett would never make a good spy or undercover agent, and her actions soon put her on the radar of some very dangerous people.

Former SEAL, now FBI agent Matt meets Scarlett at a political party, and the attraction he feels towards her is immediate.  He can't take his eyes off her.  For Scarlett though, attraction can't get in the way of her mission...and she's pretending to be someone she's not.   Matt is a firm believer in the organization he works for and for justice.  When the truth about Scarlett comes out and her actions are discovered, he, along with the rest of the FBI are convinced she is up to something criminal.  Both of them are seeking the truth, but seeing it through a different lens.

Soon the FBI, the Russians, and Scarlett are at the center of a potential political minefield.  In a race against time, Scarlett is used to no one believing her or in her father's innocence...but it's starting to look more and more like she just might be right.  At the same time that danger is circling, Matt and Scarlett are in this together...and soon they can't stop the chemistry boiling between them.  Will the truth come out before time runs out?  Or will someone get away with murder?

Toni really drew me in with this fast paced, dangerous plot.  She weaves a complex, believable story with strong characters.  I really liked both Matt and Scarlett.  Scarlett is brilliant, but not as worldly wise as Matt.  She is scared, but pursues the truth anyway.  Matt is a great hero and I loved how Toni explored the conflicts he faced once Scarlett became more than a job for him.  I really like how the relationship vs the job was handled in a mature way.

Toni gives a mix of everything good in Cold Light Of Day.  There are a lot of secondary characters that are all integral to the plot, and I liked the glimpses of characters from previous Cold Justice books.  Toni blends them in well to Cold Light of Day, so that this can definitely be read as a stand alone (although I recommend the whole series because it's so good!).  Within the main plot there are a few secondary plots that make Cold Light of Day even more intriguing.

I liked that Toni gave me enough information to know who the characters were, but she still managed to keep me guessing right to the end.  The political aspect of Cold Light of Day kept things very interesting!