In Mostly Magic (Books of The Kindling #2) by Donna June Cooper, I lost myself in magic, legends, fear, and the earth.  Donna really pulled me in and kept me enchanted all through out Mostly Magic.

Dr. Daniel Woodruff is a beekeeper, an expert on bees.  He dreams...but not like other people.  His dreams are terrifying and they predict future events.  His most recent dreams are no longer just happening when he's asleep, but awake also...and they leave him lost for a little while.  The recent ones also have him convinced he can never allow a woman to get close to him.  Ever.  In Italy for a conference, he is ready to head home to Woodruff Mountain sooner rather than later. 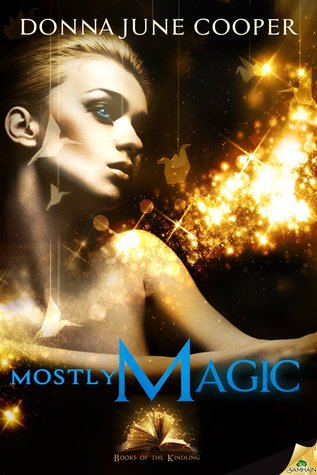 Mel is also in Italy.  A freelance journalist, she is following a strong lead that goes no where.  She is a strong supporter of environmental issues, so when she finds out Daniel is also in Italy, she is determined to interview him about an issue and company that is doing something that could have disastrous results.  Daniel wants no part of an interview with anyone...he has enough going on right now.  But he ends up needing help, and Mel is the one to give it.  As they chase his dreams, which he keeps secret, Mel also has secrets...and the issue they end up working together to out suddenly becomes very dangerous for them.

There is a definite attraction between them, but Daniel is still determined nothing can ever come of it.  When Mel ends up taking refuge at Woodruff Mountain with him it gets harder and harder to resist the pull between them.  Daniel still dreams though, and he is scared, not trusting himself, and not sure what he can do about the dreams he's having.  His sister Grace (from book one) does her best to help Daniel accept his 'gift', and find out how it can work for him.  Daniel still fears the future though, and any future with Mel is on shaky ground until he can be comfortable with his gift and what it means.  As Daniel is working through this there is still danger lurking, creeping closer to him and Mel.  When secrets finally are revealed, can they help each other and be safe again, together?  Or is it too late?

Donna really wowed me with Mostly Magic!  I loved it.  It was fast paced, engaging, and I couldn't put it down.  She pulled me in with the characters and the different things going on in their lives, had my heart racing at times and hoping at times.  I loved both Mel and Daniel.  Mel is so fun, smart, and light a bright sun beam lighting up not only Daniel's life but the pages of Mostly Magic.  She is a determined woman, but at the same time she is a journalist who also respect boundaries, and I loved that about her.  She did have her secrets too, and I felt that she handled everything well given the circumstances...knowing what to do and when.  Daniel is scared and exhausted.  I really felt for him and what he was going through, he was so confused at times.  I really liked how Donna incorporated his dreams into the plot line, so at times at first I was sure it was really happening.  I liked how she did this because this is how Daniel is experiencing things, so she gave us a great look at Daniel's perspective this way.  Together I felt that Mel and Daniel could be great, if he can only come to terms with everything and open himself up, take the chance.  All the little 'coincidences' looked like fate to me.

I loved the different setting Donna wrote about in Mostly Magic, from Italy back to Woodruff Mountain.  This made Mostly Magic stand strongly on it's own and kept things lively.  I would recommend reading More Than Magic first, but my feeling is that if you read Mostly Magic alone you would sink in easily to this world.

Donna gives realistic descriptions of people, places, and events.  The supernatural aspect of Mostly Magic is a plausible one, because you just never know!  All of this combined with the great flow, suspense and danger made Mostly Magic a 5 star read for me that I'd recommend to any romance reader who likes a good mix of paranormal and suspense.