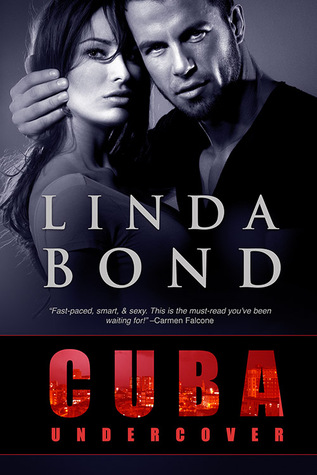 His revenge will change her life forever...Cuban-American TV reporter Rebecca Menendez's success comes from playing by the rules. When she's kidnapped by a fierce and intensely handsome man who needs her help, however, all of those rules seem pointless. Nothing could have prepared her for being taken hostage...or the irresistible reward if she complies: information about her long-thought dead father.Antonio Vega has spent almost every day of his adult life dreaming of revenging his father's death. With his sister's life and freedom in jeopardy, Antonio isn't taking any chances. But once Rebecca and Antonio are in Cuba, they're immersed in a world of corruption, deceit, and betrayal. It's a deadly game...and there are no rules.

My Review:
Between the pages of Cuba Undercover by Linda Bond was a great place to be!  Having been to Cuba a few times, I was excited to read a book in which a lot of the setting was in Cuba.  Through Linda's vivid and accurate descriptions, I could not only see the place and people she detailed in my mind, but I could feel the humidity and the heat.
I really liked the overall plot and theme of Cuba Undercover...especially since Linda manages to draw attention to a lot of ongoing political and humanitarian issues that are real.  By doing this she made her characters and their situations believable.  The way Rebecca and Antonio get to the situation they find themselves in, with her being kidnapped, was an interesting initial twist to the plot, but I felt that this not really necessary to move the plot forward, instead it was somewhat distracting.  The way they quickly moved past the kidnapping and worked together to reach goals was admirable.
Antonio and Rebecca develop a connection quickly, even as danger pursues them.  Antonio is determined to save his sister, and Rebecca is determined not only to tell the story of her and other's like her, but to find out more about the father she's never known.  This makes Rebecca and Antonio two people who are not welcome in Cuba...and even as the goal is reached the cost to them both might be heavy.  When all is said and done, can Rebecca forget Antonio and move on?
Cuba Undercover really makes one think about the issues that country and it's people are facing.  I know that this is a fiction book, but Linda has written it so well it could be real.  I loved the main characters and the secondary characters (especially Rebecca's cameraman Dallas).  I liked what Rebecca and Antonio stood for, what they believed in and stood up for.  I could feel the hope that each of them felt as well as their fear.
Cuba Undercover was so easy to immerse myself in...with a nerve wracking and dangerous at times plot with just enough romance the plot is strong and the characters are powerful.   I'd recommend Cuba Undercover to any romance reader.