Between Now and Forever (Callaways #4) by Barbara Freethy 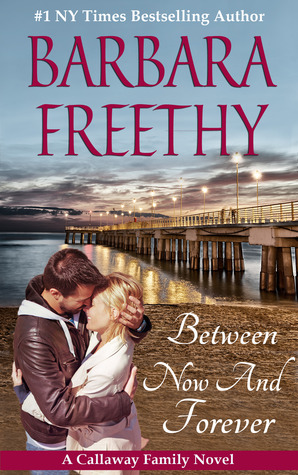 Nicole met Ryan when he was a handsome, cocky teenager with a desire to fly high above the clouds. Ryan encouraged Nicole to dream big and promised her a lifetime of happiness, but several years into their lives together, they were faced with obstacles bigger than either had ever imagined. Their love faltered. They lost their way and considered what had once been unthinkable—the end of their forever.

But now fate throws them a curve, an event that forces them back together, that strips their emotions bare and is both terrifying and strangely unifying. For the first time in a long while they have to face each other, and not only talk but also listen, because their lives depend on it—not only their lives, but also the life of their six-year-old son.

Secrets and lies frame a perilous journey to the truth that takes Nicole and Ryan to Angel's Bay, a place where miracles sometimes happen. But in order to get that miracle, Nicole and Ryan must work together and learn how to trust and love each other again. Only then will they be able to save their family and find their way to happily ever after.

Between Now and Forever by Barbara Freethy was an intense and emotional read.

I was happy to find out more about Nicole and Ryan, who we have seen glimpses of in previous books in this series. I liked that they are a mature couple, dealing with some very realistic issues, confusion, and feelings. A horrible event pulls them back together, and as they fight for their son, they begin to realize what they had might not be lost after all. But is it too late? Will they get a second chance at not only love with each other but as a family?

I saw a lot of character development in Between Now and Forever. Both Nicole and Ryan developed more insight into one another, and it is obvious from the start that they still love one another very much. I was very interested to see how they would work through their issues, or even if they could. As they are dealing with this, they are also going through every parents worst nightmare. It is a lot to cope with, and Nicole and Ryan seemed to come together very well. I liked how this was done, how they handled situations and there was a real lack of blame for either of them. There was more of a feeling of sorrow mixed with uncertainty, but at the same time hope.

I loved the setting of this book, because I've read Barbara's Angel's Bay books (completely different stories, but same setting!). I loved the bit of history that made the place unique.

It was great to see more of the Calloway's in Between Now and Forever...there are little hints of what's to come, but Barbara left me satisfied with this story and ready for more! There are some strong secondary characters who blend in well and are very relevant as the plot unfolds.

Very well written and easy to fall into, with believable and likable characters, I'd recommend Between Now and Forever to any romance reader.