Review! Under the Covers (The Texan Quartet #3) by Claire Boston 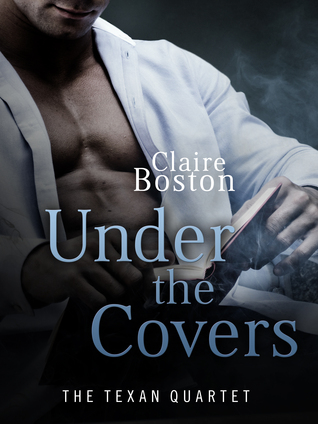 What if the one time you didn't want love was when you truly needed it?Forced to flee her abusive ex, alone with no support, Elle is determined to rebuild her life and protect her five-year-old son. Not one to take the easy road, she opens a bookshop café, but opening day almost ends in disaster. In the midst of this chaos, the last thing she needs is a man as charming as George Jones getting in her way. George has always been a sucker for a damsel in distress, and Elle ticks all the boxes. But Elle's not interested in being rescued by anyone, especially not him. She knows her taste in men can't be trusted, but fighting George's charisma is harder than she expected. And George, who is not one to ignore an itch, has found there's something about Elle that's got under his skin.When Elle's ex turns up to cause trouble, George must overcome his boyish flirtatiousness if he's to convince Elle to trust herself and let him into her life. But can Elle put her past behind her before it overwhelms her present?

Under the Covers by Claire Boston was a book that was easy to lose myself in with great characters I really enjoyed getting to know.

I really liked Elle.  She doesn't dwell on the past...instead she uses it as a motivator to push herself into the future.  She is young, but mature beyond her years.  She is a hard worker, a devoted mother, independent, brave, and strong.  Elle is not going to depend on anyone anymore or let anyone make decisions for her.  She came out of a really bad experience, and instead of letting it hold her back or poison her against all men, she is determined to make a good life for herself and her young son.  I really, really like these characteristics in a heroine.  Even though Elle has no desire for any kind of relationship, she's above painting all men with the same brush as her ex.  I like what Elle is doing, and I love her business!!

George was attracted to Elle from the moment he laid eyes on her.  Of course Elle can see his hotness, but she's not looking to get involved with anyone.  George can't stop thinking about Elle though, and soon they are spending some time together.  As much as Elle fights it, a relationship of sorts does form.  Not only between Elle and George, but between Elle's son and George.  George needs to take it slow though...he wants to rush in, help Elle, and do whatever he can for her.  He's doing it for the right reasons, but Elle can't help but feel overwhelmed and scared.  I liked that George wanted to take care of Elle, but he tends to rush into things without thinking of the consequences or Elle's feelings.  Understanding Elle's past is the key to putting things in perspective for George.

When Elle's past comes back to threaten her future and her livelihood, will Elle realize it's ok to lean on others?  That maybe George is just who she can envision a future with?

I really enjoyed the secondary characters in Under the Covers...from the group of friends, to George's family, even to Elle's ex's family.  They all added depth and livened up the plot in a special way, often making me wish they were my friends!

Claire writes smoothly with great flow to the plot.  She kept me very interested and at times on edge!

I'd recommend Under the Covers to any romance reader, especially if you like a touch of suspense to the plot!

Purchase from Amazon.com
Posted by Sue Peace at 10:46 PM