Review: Before the Storm by Leslie Tentler 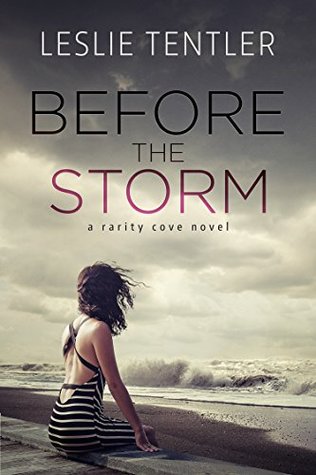 Six years earlier, Trina Grissom disappeared, on the run for her life. Now living under an assumed identity—as Samantha Marsh—she still struggles with the dark secret she harbors and the fear she might one day be found. When she moves to the coastal town of Rarity Cove, South Carolina, to open a café, a handsome widower begins to chip away at the walls she’s built to protect herself. Mark St. Clair lost his wife two years ago in a tragic accident. Head of the grand St. Clair resort, he distracts himself from his lingering grief by running the family business and caring for his troubled young daughter...until a beautiful restaurateur sets up shop in town. Before meeting Samantha, Mark was convinced he could never be drawn to another woman. But as his attraction to Samantha grows, the mystery surrounding her deepens. As the two begin a hesitant courtship, double perils emerge. Someone from Samantha’s lurid past comes calling, threatening to expose her. And a powerful hurricane is forming in the Atlantic with the small beach town in its path. Trapped in the storm by the brutal man who wants vengeance on Samantha, she and Mark must fight for their lives.

The cover of Before the Storm by Leslie Tentler drew me in first, and her amazing writing very quickly had me mesmerized in this fast paced romantic suspense!

I really enjoyed Samantha and Mark's story.  Leslie kept me on edge between the suspense and the hope of romance woven into it all.  Samantha has a secret past she hides well.  She has done really well for herself despite it all, but there is always a glimmer of fear around the edges.  She doesn't get close to anyone, but is also not letting fear of the past rule her every move.  Mark runs his family's resort, and for different, just as painful reasons has no desire to be involved with anyone at this time in his life.  When Samantha and Mark are drawn together, the hint of attraction between them slowly builds.  But as a storm closes in on them, so does real danger...

I loved how Leslie wrote Before the Storm.  The place and the characters felt real to me.  I liked what Samantha was doing with her life.  She is a strong, brave woman who I could easily feel for.  Mark is struggling also, and his daughter is so sweet.  I liked that nothing was rushed between them, and that they were both struggling with believable issues.  The connection between Samantha and Mark is unmistakable, even if they are both reluctant to move on it at first.  There is a lot going on, especially for Samantha, and I liked how Leslie Tentler worked it all into this strong plot.

The suspense is catchy and I loved where Leslie took this story, from the romance, the storm, and the fight for life.  She held my interest for the whole story with an exciting plot and great descriptions.

I'd highly recommend Before the Storm to any romantic suspense reader!