Review: Weekend with Her Bachelor (Bachelor Auction #4) by Jeannie Moon 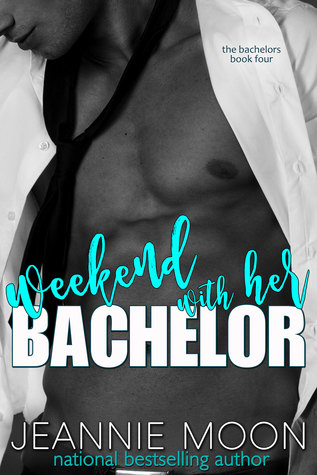 
The hot, sexy bachelors of Marietta, Montana take another trip down the runway to raise money for a good cause.

Bachelor Gavin Clark is determined to help Marietta reach its fundraising goal for the town's hospital charity. So the handsome emergency physician is up for almost anything on his date with the lucky winning bidder.

Little did he know his former high school crush, Ally Beaumont, just so happened to be that lucky winner. Their date whisks them off to her friend's destination wedding at a romantic, luxury ranch resort in the western Montana mountains and close quarters, a shared history, and a magical location push the two old friends into each other's arms...

Is Gavin and Ally's story just beginning, or will their romance end with the weekend?

In Weekend With Her Bachelor by Jeannie Moon, when Ally needs a date for a wedding weekend as fate would have it there's a bachelor auction happening in her home town of Marietta.  Her first love just happens to be one of the bachelor's and Ally finds herself in a bidding war to win him with the intention of taking him to the wedding with her.  Not just for one night either, but for a weekend.  Ally wins, and she and Gavin discover that the flames between them were never really doused.  The chemistry and connection is still there, but their past and their present stand between them.  Ally is convinced they can just be friends...Gavin is not as convinced.  Things heat up pretty quickly, but will it just be for a weekend, or will they have a second chance for a future together?  Old hurts need to be put to rest before anything either of them can move on...but will they be able to move on together?

Weekend with Her Bachelor is a fun, fast paced second chance romantic read.  It was amusing how Ally tried to convince herself they could just be friends, while Gavin was pretty open about the impossibility of them being so close and yet staying away from each other.  Jeannie Moon packs a lot of emotion, heat, and entertainment into Weekend with Her Bachelor, and I liked getting to know Gavin and Ally as they navigated an adult relationship...whether it's only for a weekend or something more.  There are many obstacles in their path physically and emotionally, and watching them find their way made for a good read.  I liked both of them, but Gavin in particular with his humor made him a great character.

I really liked the secondary characters in Weekend with her Bachelor from Lars to Gavin and Ally's family's and their words of wisdom.  They helped make the story!

I'd recommend Weekend with Her Bachelor to any romance reader.

Purchase from Amazon.com
Posted by Sue Peace at 1:27 PM