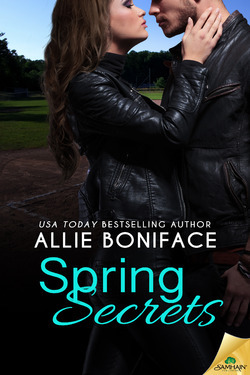 Be careful where you dig for secrets…
Pine Point, Book 3

Sienna Cruz left Pine Point at age fifteen after her mother’s untimely death. Eleven years later, a job teaching special needs kids has brought her back. At least, that’s what she wants everyone to believe.

Raised in a poverty-stricken, single-parent household, Sienna is earning her PhD with a dissertation proving even too-perfect-to-be-real Pine Point is a hotbed of small-town secrets and scandal.

Leaving Pine Point turned out to be the biggest mistake of Mike Springer’s life. After eight years on the West Coast, coming home to open a local gym is the first step toward a fresh start, this time with the support of friends and family.

Sparks fly the moment Sienna walks into Mike’s gym, and it isn’t long before they’re workout partners with benefits. Then her research not only hits too close to Mike’s fiercely guarded past, it exposes a sordid truth about skeletons Sienna didn’t know she had in her own closet.

Warning: Contains a class of cute kiddoes that will melt your heart and a sexy tattooed gym owner who can pump more than just iron...

I really enjoyed Sienna and Mike's story in Spring Secrets.  Sienna has few good memories of growing up in Pine Point, but she's back for now with her own agenda.  Mike left Pine Point, and nothing good came of that.  Now he's back in the place he truly calls home.  Having met and dated very briefly on Sienna's short return to Pine Point previously, Mike and Sienna are no strangers to the sparks between them.  But neither is looking for a relationship.  Mike has been burned badly before and is not looking to repeat that mistake.  Sienna isn't staying, and she's not looking either.  Neither seems to be able to resist the other though, and soon it may be impossible to only be friends.  When secrets and hidden agendas come out though, is there hope for a tomorrow together?  Or is it too late for trust and love?

I had a harder time connecting with Sienna in Spring Secrets, and I feel like this is because her background was so much more of a mystery than Mike's.  I felt like we got bits and pieces of it as the plot progressed, but I never felt like I truly understood her as well as I would have liked to.  I was a little uneasy about her motives for returning to Pine Point and how this would all work out!  Especially when Sienna and Mike had such an obvious connection between them.  I didn't want either of them to get hurt!  I really liked Mike.  I felt like his character was much more developed and easier to understand and connect with.  I felt for him a lot, but at the same time get frustrated with people (characters!) who hold someone else's poor choices against others of the same sex!  His character really grows a lot though, and I liked the progression of it.  Nothing felt rushed, but it felt very natural, especially after he and Sienna hooked up 'temporarily' as friends.  Sienna's character certainly grew a lot in Spring Secrets, and I liked seeing her mature, feel at home, and become more comfortable with the people and town of Pine Springs than she thought would ever be possible.  This part of her I really liked.  I couldn't wait to see how things turned out for Sienna and Mike.  Would she stay or go?  Would she change her mind about small towns, in particular Pine Point, when she looks at it and the people there through her adult eyes instead of her hurt child's eyes?  I liked the changes I saw to Sienna and Mike as they became closer and more involved not only together but with the small town of Pine Point.

I liked Pine Point and the picture of this place that Allie created in my mind.  Pine Point is a good example of the positives of small town living, and I liked this.

All about moving on and opening up to the future, family values, trust, and secrets - that some secrets should just stay secrets - Spring Secrets enchanted me with not only the characters but the place.  With great flow and pace, Allie easily made me feel like part of Pine Point.  I'd recommend Spring Secrets to any romance reader.