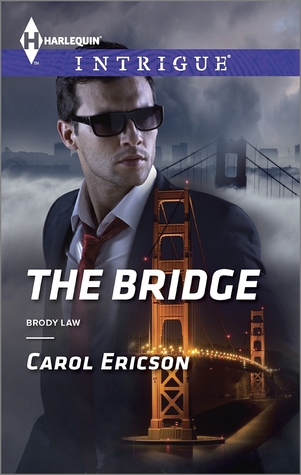 In The Bridge by Carol Ericson, Elise is the woman who escaped a serial killer. Sean is the detective who 'catches' her case. Sean's past shadows the present, but he will do all he can to keep Elise safe and catch a killer.

But the killer doesn't want to be stopped, he has a grudge and won't let go. He won't let the one who got away go too if he can help it. As the killer gets closer, so do Sean and Elise. The chemistry between them is just as hot as the plot is captivating! Will Sean catch a killer like he's caught Elise's heart? Or is it too late?

The Bridge is a quick paced, suspenseful romance novel with great action and plot twists that will keep you guessing and surprise you! The characters are interesting and make you want to know them better! Sean is a protector, doing what is right, but inside always feeling like he has to prove himself. Elise is a sweet, but naive school teacher who falls hard and fast for Sean! The only odd thing I found off with the whole story was the way she tended to insert herself into the investigation at times, taking away some of the realism.

Carol's descriptions and setting for the Bridge were fantastic. I could feel the fog when she was describing it!

I'd recommend The Bridge to any reader who craves some romantic suspense.