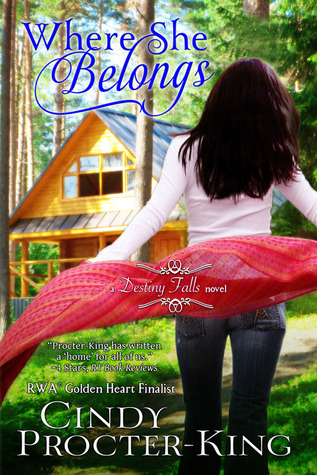 In Where She Belongs by Cindy Procter King, Jess has come 'home' to Destiny Falls - the last place she really wants to be.  When Jess and her mother faced tragedy before, instead of drawing them together, it pushed them apart.  Especially when Jess's mother remarried very quickly after the death of Jess's father.  Jess and her stepfather never had a good relationship, and she remains full of hurt and resentment.  When he dies, she goes back to help her mother.  This time, her mother is facing her grief in an entirely different way, one that confuses Jess and digs into her unhealed wounds.  Since her father's death, then her fiancee's death, Jess has never felt at home in Destiny Falls.  She's never felt at home anywhere, really.  Even in Toronto where she lives, she travels a lot for work and has no real ties to the area.  Jess really doesn't feel like she belongs anywhere.  Her plan?  To stay in Destiny Falls long enough to help her mother, then leave.  Again.

The last person she expects to meet up with on her return is Adam, her friend's cousin who she had a huge crush on when she was younger.  Adam is back in Destiny Falls, living and working there.  For him, Destiny Falls is home, for Jess it's just a tragic memory she can't move past.  She certainly doesn't want to feel anything for Adam, especially when she can feel him judging her when they first meet.  Adam is very attracted to Jess though, and he manages to slowly insert him in her life...at the same time trying to understand and support her. Adam has been betrayed in his past too, but "...he'd conquered his own childhood demons years ago."  He's also conquered his adulthood demons and been able to move on.  Now he sees something in Jess even she doesn't see, and is falling hard for her.

I felt that the major difference between Adam and Jess is that Adam is comfortable in his own skin, he is happy with his life and who he is.  He is very persistent in his pursuit of Jess as well as the achievement of his goals and plans for life.  Jess does strike me as a high achiever, but she's not so comfortable in her own skin or with her life.  She wants to deal with everything alone.  She's loved and lost once, and doesn't want to risk anything again.  Being with Adam becomes irresistible though, and as Jess mends her relationship with her mother, she builds one with Adam.  Even if it is short term.  They both know she's leaving again.  It is very sudden for Jess when Adam decides he wants more.  Jess will need to decide if she truly wants to be alone or has she found a place she can finally belong again?

Where She Belongs is a small town romance that brings to life the feel of life there without being suffocating.  Jess and Adam's characters are a good mix, and I think their traits can compliment each other if they give it a chance.  Adam was easier to relate to for me...though I don't know if I'd want to be with someone I had to work so hard to convince as he does with Jess!  He is not free of issues, but he doesn't hold them against the world.  I found it really hard to connect with Jess's character, so it was fun to watch her character develop in Where She Belongs.

I liked the different relationships we saw in Where She Belongs, it was definitely not just about Adam and Jess.  All the secondary characters and stories help round out their story.

Well written and easy to follow, if you like small town romance with a heroine suffering a lot of angst you will enjoy Where She Belongs.