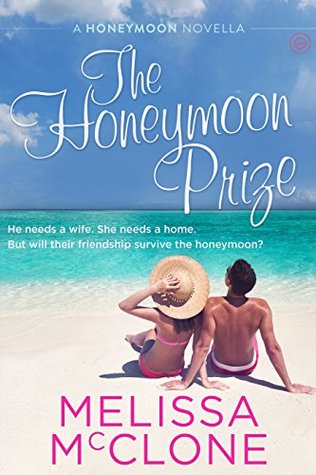 In The Honeymoon Prize by Melissa McClone Addie and Nick have known each other for what seems like forever.  He first proposed to her in kindergarten, but it seemed they were destined to a lifetime as friends only.  They have both been attracted to the other at different times, not acting on it, not wanting to ruin a friendship.  When it seems like Addie's world is falling apart, Nick is there for her.  He offers a solution that will help both of them.  But can either of them last a 5 year marriage of convenience?  Keeping up the facade is even more difficult when they head off to a private island in Fiji for The Honeymoon Prize they've won, completely unaware that they will be part of a reality show.  Soon the lines start to blur and it doesn't feel like such an act anymore.  But is it real or not?  What will happen when the honeymoon is over?

The Honeymoon Prize was a fast paced, intriguing novella.  I love the setting Melissa used, she took me right there...I can feel and smell the tropical air and the water.  Addie and Nick are great friends but they've kept things hidden too, and it was great to be along for their combustible ride.  They are a couple who are so obviously connected in so many ways and they have fun together despite everything which I love.  I liked that they were up front and honest as things progressed.  Nick and Addie are great characters who drew me in and made me want to know so much more about them.

I'd recommend The Honeymoon Prize to any romance reader.