Review: One Night with the Bad Boy by Eve Gaddy 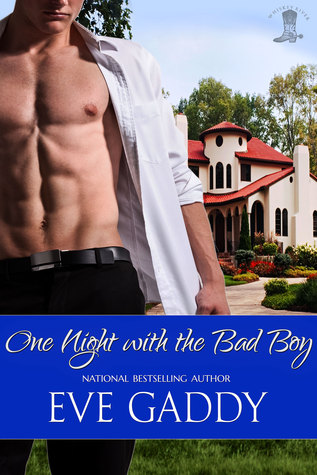 The Blues might be new to Whiskey River, Texas, but these illegitimate sons of the legendary Boots Kelly are no strangers to charisma.Xander Blue, IT genius, has always been a love ’em and leave ’em kind of guy. But when he meets the CFO of Kelly Boots, beautiful single mom, Bailey Richmond, he knows he’s down for the count.Bailey Richmond has been there and done that and won’t do it again. In Bailey’s eyes, once a player always a player and she and her son have too much at stake to risk it all on a fling. But dark-haired, blue-eyed, sexy Xander Blue makes her question all her rules.Xander is determined to prove to Bailey that there’s more between than chemistry. Can a charming millionaire convince a once bitten, forever shy single mom that she wants more than one night with the bad boy?

I am really enjoying following the journey of these brothers in this series!

I loved Xander, the challenges he's going through, the changes that have happened overnight to his life, and the easy acceptance he has with it all.  Don't get me wrong, it's not a smooth road to the future, but the way Xander is navigating this new path is a great journey to take with him and his brothers!  Getting to know all of the brothers is what I am loving the most about this series!

When Xander sees Bailey across the room, he's immediately smitten with her and wants to know her much better.  He's not sure what his future holds, but he wants the present to include Bailey.  Bailey is a woman who is not interested in relationships.  She's been burned once and that has tainted all men for her.  She also is very protective of her son, and doesn't want him to be hurt.  So Bailey is all about no relationships, no meeting of families, and what comes across as no trust.  Xander is definitely not relationship material for her...but what's some fun between the sheets?

Xander and Bailey have great chemistry, and Xander finds himself wanting more than he's ever wanted before.  But convincing Bailey that he's not a short term man might be impossible.

As I said, I loved Xander.  I didn't like Bailey as much, because I got really tired of her attitude towards men...especially the one she's currently spending a lot of time with.  She has great qualities...she's independent, she's a fantastic mother, and she is a hard worker, but for me the way she treated Xander turned me off.  Although I didn't really care for her, it is a sign of great writing that Eve has made Bailey so real and easy to have some kind of feelings about!  You'll have to read One Night With the Bad Boy to see how it all unfolds and turns out!

I love the underlying theme of the brothers in this series .  I am watching them get to know one another and form relationships not only with each other, but with other people and the town of Whiskey River.

I look forward to reading the next book in this series and would recommend it to any romance reader!