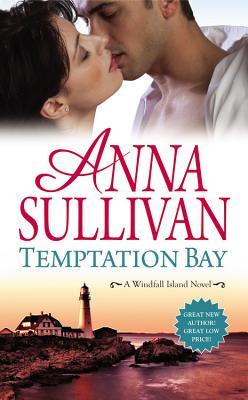 In Temptation Bay (Windfall Island #1) by Anna Sullivan, private investigator Dex, posing as a lawyer, heads to Windfall Island in search of a long lost heir.  Before he even gets to Windfall Island, he is distracted, attracted and intrigued by Maggie.  Helicopter pilot Maggie calls Windfall Island home, and is very protective of the place and the people there.  As soon as she sees Dex, she is conflicted because she is attracted to him, but doesn't trust him.

Dex's mission on Windfall Island is top secret, he doesn't want anyone to know why he's really there.  As he unsuccessfully searches for answers, he is more and more drawn to Maggie and the desire to be with her.  Maggie feels the magnetism between them also, but refuses to give in to it.  She does her best to avoid Dex.   Dex soon realizes he's going to need help to find what he's looking for though, and it's Maggie he turns to.  Reluctantly, Maggie agrees to help Dex even though it will mean spending way more time with him...And as they do, they become closer.  Somewhere between pushing him away and denying her feelings, Maggie finds herself in deep with Dex.

As a new kind of relationship starts to develop between Maggie and Dex, someone knows what they are doing.  Someone who doesn't want them to find answers and will do anything to stop them.

Temptation Bay is really two stories that come together.  Maggie and Dex's relationship, and Dex's search for a missing heir.  Anna gives us romance with a lot of conflict between Maggie and Dex, and a very intriguing mystery.  I love the setting of Temptation Bay, the small island population and all the quirky characters who live there.  Anna does a great job of bringing Windfall Island to life.

I did  find it difficult to identify with or feel much for Maggie.  Yes, she has her past issues and secrets...but she is all grown up now, and the way she acts and treats Dex at times did not reflect positively on her character.  Maggie is very aggressive where I found Dex to be much more laid back, even if he is full of secrets himself.  He is open that he has them and his reasons for not revealing them.  Sometimes I was full of wonder that Dex actually still wanted to be with Maggie.  The chemistry between them is undeniable though, and Anna write this well as they find their way together.

The mystery part of Temptation Bay was a bit slow to get going, and a bit difficult to get into because so much of the book is about the turmoil of Maggie and Dex's relationship.  It is a solid plot, and I found myself wanting more of that!

Anna does a great job of concluding Temptation Bay so that part of the story finishes, but there's still more to be told, without a cliffhanger.

I'd recommend Temptation Bay to romance readers who like a lot of conflict between characters, a mystery, and a great setting!