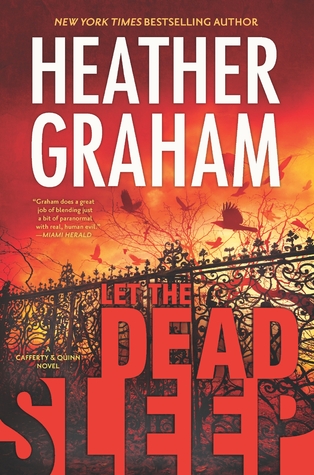 An Object of Desire? Or of Fear? It was stolen from a New Orleans grave—the centuries-old bust of an evil man, a demonic man. It's an object desired by collectors and by those with wickedness in their hearts. One day, its current owner shows up at Danni Cafferty's antiques shop on Royal Street, the shop she inherited from her father. But before Danni can buy the statue, it disappears and the owner is found dead…. Michael Quinn, former cop and now private investigator, is determined to find and destroy this object with its long history of evil and even longer trail of death. He and Danni are drawn together in their search for the missing statue, following it through sultry New Orleans nights to hidden places in the French Quarter and secret ceremonies on abandoned plantations. But Cafferty and Quinn know that their story won't end when this case is closed and the dead rest in peace once again.

Let The Dead Sleep by Heather Graham has been in my TBR pile for way too long and I'm so glad I read it!

Heather writes a very intriguing, chilling story in Let The Dead Sleep and I couldn't get enough of it!  I loved the great mix of mystery, suspense, paranormal, and the touch of romance that enhances the overall plot.  I liked how Danni is not a clear picture at the start of the book, and as more is revealed, Danni is just as shocked as I was.  I felt that Heather wove what Danni is and what she could do in well with the suspenseful plot, giving away just enough at just the right times.  I had a clearer picture of Quinn in my mind from the start, but even then there were secrets about him that arose through Let The Dead Sleep.  I liked how Danni and Quinn grew on each other...it certainly wasn't an immediate attraction or even friendship!  I liked how they were together as their relationship grew and as the danger crept closer.

I really liked how Heather wrote the paranormal into Let The Dead Sleep.  There was enough to make my hair stand on end, just as it wasn't so far fetched that I couldn't help thinking what if?!!  I loved, loved the New Orleans setting, and Heather describes it exactly how I picture it in my head.  I felt like I was there.  I also liked how Heather brought in different believes and how people accepted them.

In a fight of good versus evil and for some the unbelievable, Let The Dead Sleep was fast paced, and well written.  Heather kept me turning the pages very intrigued.  I'd recommend Let The Dead Sleep to any paranormal suspense reader who likes some romance blended in.

I'll be diving into Waking The Dead next!